An Engineer’s Perspective on Some  Societal Problems 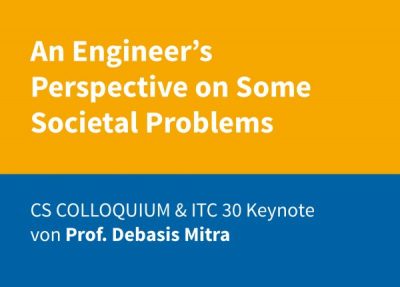 This engineer relies on models, analysis and model-based experimentation to explore some societal problems. Examples of such problems are: the role of knowledge, its nurture and impact, in high-tech industries; the survival of the Best Effort service on the Internet in an uncertain regulatory environment; inter-organizational working for content delivery in an increasingly content-centric Internet. Some results will be discussed.

Debasis Mitrais Professor of Electrical Engineering at Columbia University. Prior to joining Columbia in 2013, he worked at Bell Labs for 44 years. During 1999-2007 he was Vice President of the Mathematical and Algorithmic Sciences Research Center. He directed work in fundamental mathematics, algorithms, complex systems analysis, optimization, statistics, information & communication sciences and operations research. During 2008-2013 he served as Vice President, Chief Scientist’s Office.
At Columbia he teaches a graduate course on Internet economics. Examples of his research areas are network neutrality, network economics, the science and management of innovations and knowledge stock.
Debasis Mitra is a member of the National Academy of Engineering, a Bell Labs Fellow and a Life Fellow of the IEEE. He is a recipient of the 2012 Arne Jensen Lifetime Achievement Award from the International Teletraffic Congress, the 2012 ACM SIGMETRICS Lifetime Achievement Award, the 1998 IEEE Eric E. Sumner Award, the 1993 Steven O. Rice Prize Paper Award and the 1982 Guillemin-Cauer Prize Paper Award of the IEEE, among other awards.
Debasis Mitra has been on the editorial boards of the IEEE/ACM Transactions on Networking, the IEEE Transactions of Communications, the IEEE Transactions on Circuits and Systems, Queueing Systems (QUESTA) and Operations Research.