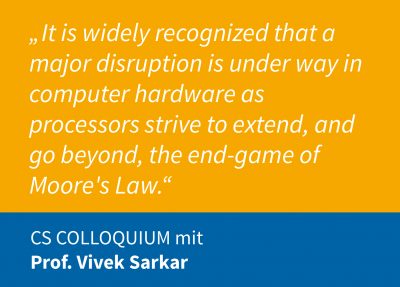 It is widely recognized that a major disruption is under way in computer hardware as processors strive to extend, and go beyond, the end-game of Moore’s Law. This disruption will include new forms of heterogenous processors, heterogeneous memories, near-memory computation structures, and, in some cases, Non-von Neumann computing elements.

Vivek Sarkaris a Professor in the School of Computer Science, and the Stephen Fleming Chair for Telecommunications in the College of Computing at at Georgia Institute of Technology, since August 2017. Prior to joining Georgia Tech, Sarkar was a Professor of Computer Science at Rice University, and the E.D. Butcher Chair in Engineering. During 2007 – 2017, Sarkar led Rice’s Habanero Extreme Scale Software Research Laboratory which focused on unifying parallelism and concurrency elements of high-end computing, multicore, and embedded software stacks (http://habanero.rice.edu). He also served as Chair of the Department of Computer Science at Rice during 2013 – 2016.
Prior to joining Rice in 2007, Sarkar was Senior Manager of Programming Technologies at IBM Research.  His research projects at IBM included the X10 programming language, the Jikes Research Virtual Machine for the Java language, the ASTI optimizer used in IBM’s XL Fortran product compilers, and the PTRAN automatic parallelization system.  Sarkar became a member of the IBM Academy of Technology in 1995, and was inducted as an ACM Fellow in 2008.  He has been serving as a member of the US Department of Energy’s Advanced Scientific Computing Advisory Committee (ASCAC) since 2009, and on CRA’s Board of Directors since 2015.